A Happy New Year from the Belles!

Our first meeting of 2014 was a fun social event for all. The meeting was dedicated to getting to know each other and having fun playing a selection of children’s games including Snap, Snakes & Ladders, Ludo and Guess Who (Marvel edition)!

We also had a fab update on the Belles New Wave weekend trip to Denman, which inspired us all to take a trip to the college in the future. From singing lessons to decorating cupcakes to Bollywood and Tina Turner dancing – there was something for everyone! Many Belles now plan to join the dance class when it arrives at the Cambridge Federation and to catch their singing teacher Kevin O’Regan at a local folk gig.

Belles were also treated to authentic Mexican treats at the meeting thanks to Lucy Gonzalez, and sampled chilli covered watermelon lollies while trying to throw a six, guessing between Iron Man and Spider Man and describing as many words as possible in 30 seconds!

The group also took the opportunity to raise its individual votes for the NFWI Resolutions – the Belles first chance to participate in the annual event where each WI member uses their power to vote towards a campaign which will be run by the NFWI from this year onwards. This year’s resolutions included raising awareness around organ donation, campaigning against female genitalia mutilation, provision of non-acute hospital beds and the support for funding of women’s centres to cater for the specific needs of vulnerable women at risk of offending. Each Belle cast their vote which were compiled and sent off to Federation level for counting. We’re looking forward in anticipation to hearing which campaign we’ll be flying the flag for collectively in the near future….. 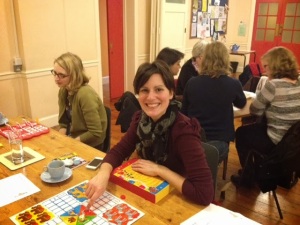 We are a fun and friendly WI group meeting in the heart of beautiful Cambridge. View all posts by Cambridge Blue Belles